The Tevatron may have been shut down last year but the data they collected is still being analyzed.

And it’s perhaps no accident that they managed to squeeze out an announcement today, just two days before the scheduled announcement from the LHC: their observations are “consistent with the possible presence of a low-mass Higgs boson.” 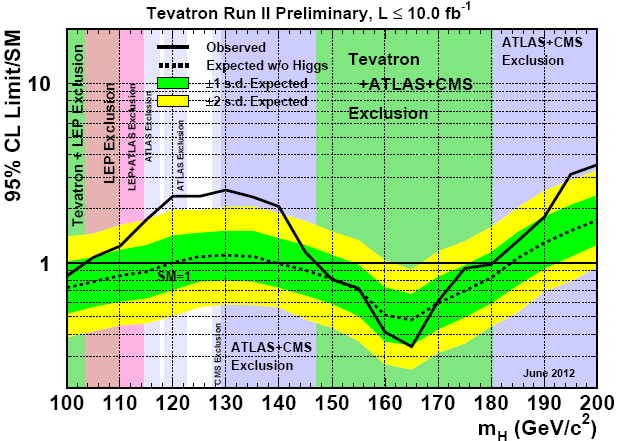 The Tevatron has analyzed ten “inverse femtobarns” worth of data. This unit of measure (unit of luminosity, integrated luminosity to be precise) basically tells us how many events the Tevatron experiment produced. One “barn” is a whimsical name for a tiny unit of area, 10−24 square centimeters. A femtobarn is 10−15 barn. And when a particle physicist speaks of “inverse femtobarns”, what he really means is “events per femtobarn”. Ten inverse femtobarns of “integrated luminosity”, then, means a particle beam that, over time, produced ten events per every 10−39 square centimeters.

Now this makes sense intuitively if you think of a yet to be discovered particle or process as something that has a size. Suppose the cross-sectional size of what you are trying to discover is 10−36 square centimeters, or 1000 femtobarns. Now your accelerator just peppered each femtobarn with 10 events… that’s 10,000 events that fall onto your intended target, which means 10,000 opportunities to discover it. On the other hand, if your yet to be discovered object is 10−42 square centimeters in size, which is just one one thousandths of a femtobarn… ten events per femtobarn is really not enough, chances are your particle beam never hit the target and there is nothing to see.

The Tevatron operated for a long time, which allowed them to reach this very high level of integrated luminosity. But the cross-section, or apparent “size” of Higgs-related events also depends on the energy of the particles being accelerated. The Tevatron was only able to accelerate particles to 2 TeV. In contrast, the LHC is currently running at 8 TeV, and at such a high energy, some events are simply more likely to occur, which means that they are effectively “bigger” in cross section, more likely to be “illuminated” by the particle beam.

The Tevatron is not collecting any new data, but it seems they don’t want to be left out of the party. Hence, I guess, this annoucement, dated July 2, indicating a strong hint that the Higgs particle exists with a mass around 125 GeV/c2.

On the other hand, CERN already made it clear that their announcement will not be a definitive yes/no statement on the Higgs. Or so they say. Yet it has been said that Peter Higgs, after whom the Higgs boson is named, has been invited to be present when the announcement will be made. This is more than enough for the rumors to go rampant.

I really don’t know what to think. There are strong reasons to believe that the Higgs particle is real. There are equally strong reasons to doubt its existence. The observed events are important, but an unambiguous confirmation requires further analysis to exclude possibilities such as statistical flukes, events due to something else like a hadronic resonance, and who knows what else. And once again, I am also reminded of another historical announcement by CERN exactly 28 years prior to this upcoming one, on July 4, 1984, when they announced the discovery of the top quark at 40 GeV. Except that there is no top quark at 40 GeV… their announcement was wrong. Yet the top quark is real, later to be discovered having a mass of about 173 GeV.

Higgs or no Higgs? I suspect the jury will still be out on July 5.