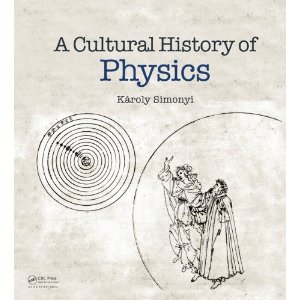 I am holding in my hands an amazing book. It is a big and heavy tome, coffee table book sized, with over 600 lavishly illustrated pages. And it took more than 30 years for this book to appear finally in English, but the wait, I think, was well worth it.

The name of Charles Simonyi, Microsoft billionaire and space tourist, is fairly well known. What is perhaps less well-known in the English speaking world is that his father, Karoly Simonyi, was a highly respected professor of physics at the Technical University of Budapest… that is, until he was deprived of his livelihood by a communist regime that considered him ideologically unfit for a teaching position.

Undeterred, Simonyi then spent the next several years completing his magnum opus, A Cultural History of Physics, which was eventually published in 1978.

Simonyi was both a scientist and a humanist. In his remarkable, unique book, history and science march hand in hand from humble beginnings in Egypt, through the golden era of the classical world, through the not so dark Dark Ages, on to the scientific revolution that began in the 1600s and culminated in the discoveries of Lagrangian mechanics, thermodynamics, statistical physics, electromagnetism and, ultimately, relativity theory and quantum physics.

And when I say lavishly illustrated, I mean it. Illustrations that include diagrams, portraits, facsimile pages from original publications decorate nearly every single page of Simonyi’s tome. Yet it is fundamentally a book about physics: the wonderfully written narrative is well complemented by equations that translate ideas into the precise language of mathematics.

I once read this book, my wife’s well worn copy, from cover to cover, back in the mid 1990s. I feel that it played a very significant role in helping me turn back towards physics.

Simonyi’s book has seen several editions in the original Hungarian, and it was also translated into German, but until now, no English-language translation was available. This is perhaps not surprising: it must be a very expensive book to produce, and despite its quality, the large number of equations must surely be a deterrent to many a prospective buyer. But now, CRC Press finally managed to make an English-language version available.

(Oh yes, CRC Press. I hated them for so many years, after they sued Wolfram and had Mathworld taken off-line. I still think that was a disgusting thing for them to do. I hope they spent enough on lawyers and lost enough sales due to disgusted customers to turn their legal victory a Pyrrhic one. But that was more than a decade ago. Let bygones be bygones… besides, I really don’t like Wolfram these days that much anyway, software activation and all.)

Charles Simonyi played a major role in making this edition happen. I guess he may also have spent some of his own money. And while I am sure he can afford a loss, I hope the book does well… it deserves to be successful.

For some reason, the book was harder to obtain in Canada than usual. It is not available on amazon.ca; indeed, I pre-ordered the book last fall, but a few weeks ago, Amazon notified me that they are unable to deliver this item. Fortunately, CRC Press delivers in Canada, and the shipping is free, just like with Amazon. The book seems to be available and in stock on the US amazon.com Web site.

And it’s not a pricey one: at less than 60 dollars, it is quite cheap, actually. I think it’s well worth every penny. My only disappointment is that my copy was printed in India. I guess that’s one way to shave a few bucks off the production cost, but I would have paid more happily for a copy printed in the US or Canada.

5 Responses to “An amazing book: A Cultural History of Physics”