I was watching CNN’s Fareed Zakaria today, who expressed his opinion that the Eurozone crisis is over: that Greece may still default, but by and large, as a result of the activities of the European Central Bank, the Euro itself is now stable and its long-term survival is assured. I hope Zakaria is correct… indeed, this may be the best-case scenario, with a stronger Euro emerging from this crisis. One hopeful sign supporting this optimistic scenario has been the drop in the 10-year rates of Spanish and Italian government bonds; from a peak near 7% (exceeding 7% briefly in the case of Italy) the rates are back down to a more manageable 5.5%. 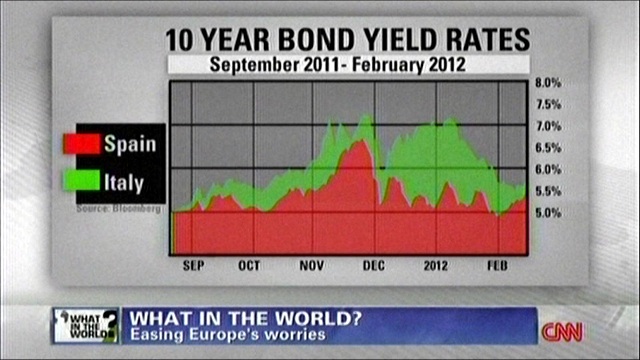 I wish I could say the same thing about Hungary. Unfortunately, the interest rate on 10 year bonds there is still well in excess of 8%. True, 8% is less than the 10% this rate was at just less than two months ago, or the astonishingly high rate over 12% back in 2009, but it is still very high, limiting the Hungarian government’s ability to deal with the crisis. The fact that many Hungarians (individuals, businesses, even municipalities) have accumulated large debts in foreign denominations (mainly in Swiss francs) also complicates things. Normally during this crisis, having a national currency should have worked to the government’s advantage; not with these excessive foreign currency debts.