The word “meme” is a relatively new one, originally coined by Richard Dawkins in his 1976 book, The Selfish Gene as the cultural analog of a gene. A meme is a concept or an idea that spreads to person to person within a culture. By their very nature, good memes survive even in harsh environments, despite official sanctions, bans, or attempts at censorship.

Two days ago, a massive demonstration took place in Budapest, Hungary, triggered by the country’s new constitution and the increasingly authoritarian behavior of the ruling Fidesz party. The country’s public television channel tried to downplay the significance of these demonstrations in its evening newscast, strategically placing its reporter on a quiet street, away from the crowds.

In protest, Hungary’s pre-eminent frivolous political party, the Two-tailed Dog Party published a satire of the evening newscast. This was too much for the humor-deficient political elite of (no longer The Republic Of) Hungary: the Web site was banned. (For now, the youtube version of the video is still available.)

But it’s a tad harder to ban a meme. Since the ban, a new form of art is spreading on Hungarian Web sites: the image of the same television reporter pasted in front of varying historical backgrounds, with humorous captions. Here is my favorite: 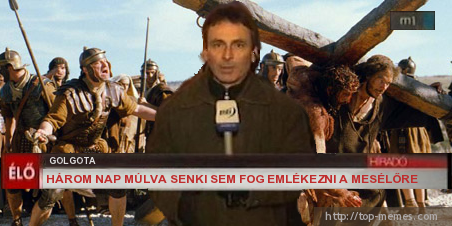 There was little public interest as members of his immediate family joined Jesus C. (33), a felon with multiple convictions known for his anti-regime speeches, on his final voyage.

In English, the on-screen captions read: “Golgota; Live; In three days, no one will remember the storyteller”.

One Response to “Try banning a meme, morons!”