Let me preface this with… I have huge respect for eminent physicist Michio Kaku, whose 1993 textbook, Quantum Field Theory: A Modern Introduction, continues to occupy a prominent place on my “primary” bookshelf, right above my workstation.

But… I guess that was before Kaku began writing popular science books and became a television personality.

Today he appeared on CNN and astonished me by suggesting that the best course of action is to bury and entomb Fukushima like they did with Chernobyl. 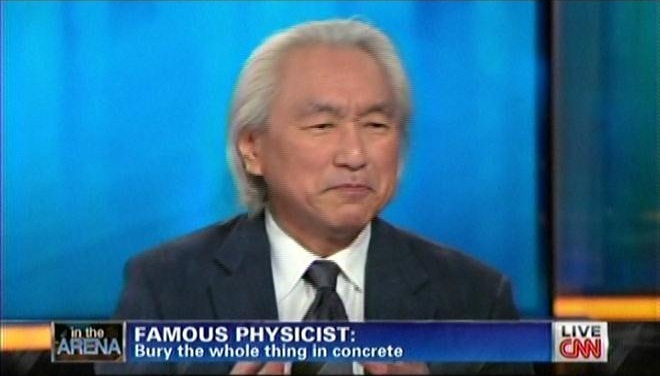 Never mind that in Chernobyl, the problem was a raging graphite fire that had to be put out. Never mind that Chernobyl had no containment building to begin with. Never mind that in Chernobyl, there was a “criticality incident”, a runaway chain reaction, whereas in Fukushima, the problem is decay heat. Never mind that in Chernobyl, the problem was localized to a single reactor, whereas in Fukushima, it is several reactors and also waste fuel pools that are threatened. Never mind that the critical problem at Fukushima is the complete loss of electrical power. Never mind that a single chunk of burning graphite flying out of the Chernobyl inferno probably carried more radioactivity than the total amount released by Fukushima after it’s all over. Who cares about the actual facts when you can make dramatic statements on television about calling in the air force of the Red Army, and peddle your latest book at the same time? I do not wish to use my blog to speak ill of a physicist that I respect but I think Dr. Kaku’s comments are unfounded, inappropriate, sensationalist, and harmful. I feel very disappointed, offended even; it’s one thing to hear this kind of stuff from the mouths of ignorant journalists or pundits, but someone like Dr. Kaku really, really should know better.