The surprising bit is that another space probe orbiting Mars, designed to operate for two years but still working fine after four, has been able to snap high resolution pictures of Phoenix, which tell us what likely happened: the weight of carbon dioxide snow and ice broke Phoenix’s solar panels. 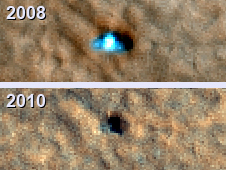 It is amazing that we have this kind of infrastructure around Mars.