I have a travel radio.

It is a SONY ICF-SW1. It is an amazing little radio, probably the nicest radio ever made by anyone. It looks more like jewelry than a radio.

It is an immensely capable universal receiver, with continuous tuning in the AM band between 150 and 29995 kHz, and in the FM band between 76 and 108 MHz. About the only shortcoming that was mentioned by its critics is that it is a shame that such a radio does not offer the ability to selectively pick modulation schemes (e.g., narrowband FM, SSB).

I bought this radio maybe a quarter century ago, back in the 1990s. (So I guess it qualifies as an antique, despite the fact that there really are no comparable receivers out there that I know about.) I thought about buying one for quite some time but at first, I refrained as the radio was quite pricey. But one day, while waiting for my flight back home at Budapest Airport, I could not resist anymore: I saw the radio at the duty free shop and bought it.

Come to think of it, it must have been 1993 or earlier, because as I recall, the radio was already in my possession when I visited Beijing in the fall of ’93. As such, it began to show signs of age, its sound quality deteriorating because of aging electrolytic capacitors.

A few months ago, I purchased a capacitor kit off eBay, in the hope that I might be able to repair the radio. In fact, I began the repair job back in the summer, starting with taking the radio apart; not an easy task by itself, as it requires not just the removal of countless screws, not just carefully separating snap-together parts of the radio’s case without causing damage, but also desoldering several wires. 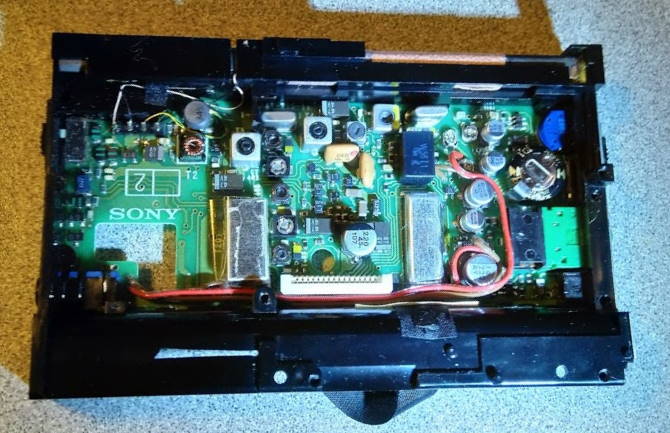 Back in the summer, I successfully replaced two capacitors but then I put the radio aside. It was hard work, and very easy to make irreversible mistakes working on submillimeter scale parts with a soldering iron. As I attempted to replace a third capacitor last night, I managed to rip up a small patch of the printed circuit board. I was able to repair the damage with a piece of wire, but this was the point when I said, enough is enough; “do no harm” should be my mantra, and I certainly do not wish to destroy this beautiful little device. So I decided to forego the rest, in the hope that the two largest capacitors that I replaced (the third was a backup capacitor for the microprocessor, to keep it powered while replacing batteries) would be sufficient. I did, however, replace the display backlight: the original backlight was a low-luminosity green LED, which I replaced with a modern, high-luminosity white LED that I received as part of the kit.

Putting everything back together was a challenge, too, and not just because the light didn’t work at first (bad soldering on my part). Ultimately I managed, though I ended up with four surplus screws with no place to go. (I think I know where they’re from, but they are redundant, and there’s no way I am going to take this radio apart again just to put those screws back in.) And much to my surprise, the radio works, and its sound quality indeed improved noticeably.

As I was studying the circuit diagram of the radio, I kept wondering what possessed SONY to produce a little marvel like this. This radio is insanely complex, with its multiple circuit boards in an absolutely tiny package. The number of distinct parts (each carefully labeled in the service manual with replacement order numbers) is astonishing. Was it a labor of love? Were they showing off? Probably both.