Seventy-five years ago this morning, a false dawn greeted the New Mexico desert near Alamagordo. 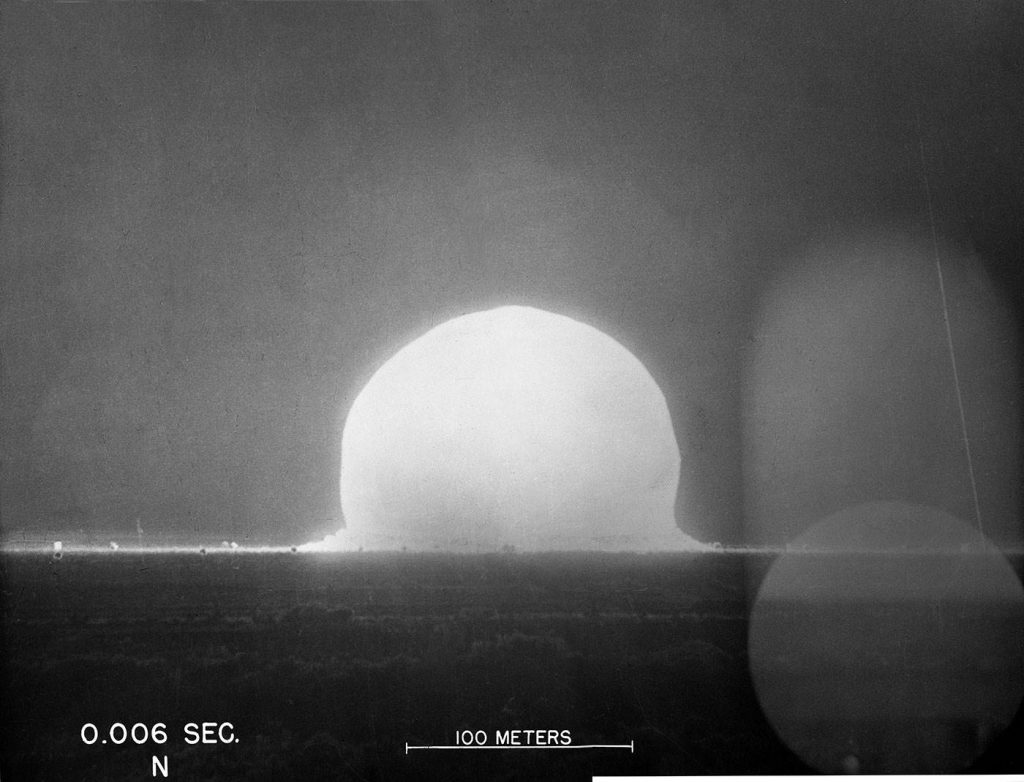 At 5:29 AM in the morning, the device informally known as “the gadget” exploded.

“The gadget” was a plutonium bomb with the explosive power of about 22 kilotons of TNT. It was the first nuclear explosion on planet Earth. It marked the beginning of the nuclear era.

I can only imagine what it must have been like, being part of that effort, being present in the pre-dawn hours, back in 1945. The war in Europe just ended. The war in the Pacific was still raging. This was the world’s first high technology war, fought over the horizon, fought with radio waves, and soon, to be fought with nuclear power. Yet there were so many unknowns! The Trinity test was the culmination of years of frantic effort. The outcome was by no means assured, yet the consequences were clear to all: a successful test would mean that war would never be the same. The world would never be the same.

And then, the most surreal of things happens: minutes before the planned detonation, in the pre-dawn darkness, the intercom system picks up a faint signal from a local radio station, and music starts playing. It’s almost as if reality was mimicking the atmosphere of yet-to-be-invented computer games.

When the explosion happened, the only major surprise was that the detonation was much brighter than anyone had expected. Otherwise, things unfolded pretty much as anticipated. “The gadget” worked. Success cleared the way to the deployment of the (as yet untested) simpler uranium bomb to be dropped on Hiroshima three weeks later, followed by the twin of the Trinity gadget, which ended up destroying much of Nagasaki. The human cost was staggering, yet we must not forget that it would have been dwarfed by the costs of a ground invasion of the Japanese home islands. It was a means to shorten the war, a war not started by the United States. No responsible commander-in-chief could have made a decision other than the one Truman made when he approved the use of the weapons against Imperial Japan.

And perhaps the horrors seen in those two cities played a role in creating a world in which the last use of a nuclear weapon in anger occurred nearly 75 years ago, on August 9, 1945. No one would have predicted back then that there will be no nuclear weapons deployed in war in the coming three quarters of a century. Yet here we are, in 2020, struggling with a pandemic, struggling with populism and other forces undermining our world order, yet still largely peaceful, living in a golden age unprecedented in human history.

Perhaps Trinity should serve as a reminder that peace and prosperity can be fragile.