I was watching the seemingly flawless launch of SpaceX’s resupply flight to the ISS and like others, I was flabbergasted when the Webcast was suddenly blacked out (“Please Stand By”), then the flight director came on, announced that the spacecraft was experiencing an anomaly and more information will be provided at a press conference in a few hours and… that’s it. Webcast ends.

So like other good early 21st century netizens, I turned to Twitter: the speculation is that the spacecraft may have failed to deploy its solar arrays, perhaps because there was no fairing separation. This is Bad News. Some speculated that Dragon has sufficient battery power to make it to the ISS and that a spacewalk might fix things, but I don’t think things are that simple.

I guess there is nothing to do but wait for that press conference.

The live video was breathtaking, by the way. Watching the bell of the second stage engine glow yellowish-red was amazing. 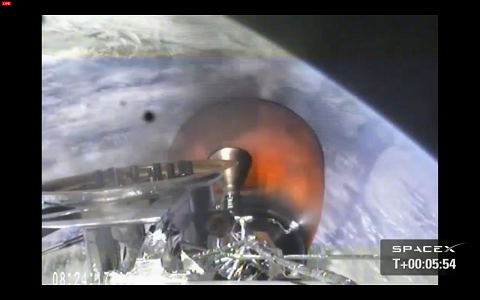 So… my fingers remain firmly crossed.