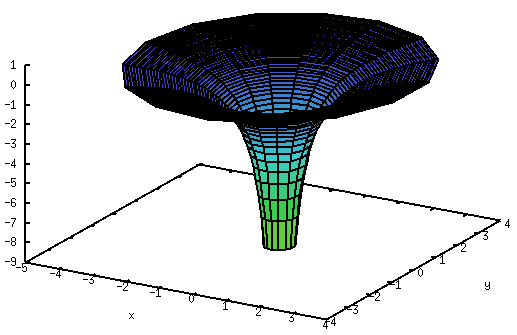 There is something curious about gravity in general relativity. Specifically, the gravitational potential.

Things are different in general relativity. The geometry of spacetime, in particular the metric and its components are determined by the gravitational potential itself, not its gradient. In particular, we have

in the infamous Schwarzschild metric, where \(g\) is the metric tensor, \(G\) is the universal gravitational constant, \(c\) is the speed of light, \(M\) is the mass of the gravitating object, and \(r\) is the distance from it. Since the Newtonian gravitational field is given by \(U=-GM/r\), this means

This quantity has physical significance. For instance, the angle by which light is deflected when it passes near a star is given by \(4c^{-2}U\).

You could be forgiven for thinking that this is the right answer, but it really isn’t. For let’s just calculate the gravitational potential of the Sun as felt here on the Earth. Yes, I know, the Sun is quite a distance away and all, but play along, will you.

Whoops! This is more than an order of magnitude bigger than the Earth’s own gravitational potential! So right here, on the surface of the Earth, \(U\) is dominated by the Sun!

Or is it? Let’s just quickly check what the gravitational potential of the Milky Way is here on the Earth. The Sun is zipping around the center in what we believe is a roughly circular orbit, at a speed of 250 km/s. We know that for a circular orbit, the velocity is \(v_\star=\sqrt{GM_\star/R_\star}=\sqrt{U_\star}\), so

But wait a minute, is this the end? There is the Local Supercluster of galaxies of which the Milky Way is part. Its mass \(M_V\) is believed to be about \(10^{15}\) times the mass of the Sun, and it is believed to be centered near the Virgo cluster, about 65 million light years or about \(R_V=6.5\times 10^{23}\) meters away. So (this is necessarily a crude estimate, but it will serve as an order-of-magnitude value):

So the local gravitational field is dominated by the most distant matter in the universe.

And by local gravitational field, I of course mean the local metric, which in turn determines how light is deflected, how clocks slow down, how the wavelength of photons shifts.

One Response to “Relativity and the gravitational potential”