I was looking for something else in my blog when I came across this post of mine from last May, putting my rusty R programming skills to use and producing some maps representing COVID-19 statistics.

Needless to say, the situation is quite different today, but in some ways at least, the more things change the more they remain the same.

The number of cases per million people is up, way up of course. 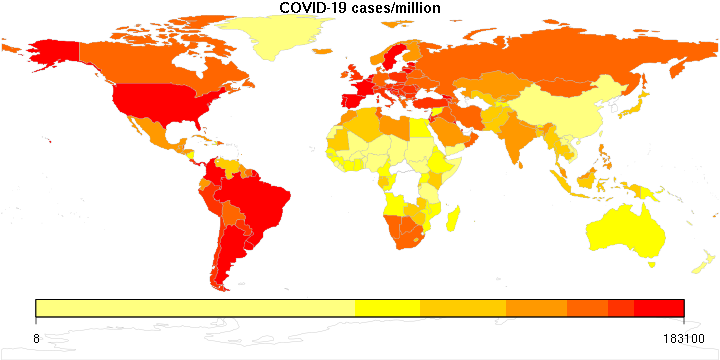 However, the trend remains the same: the worst numbers come from Europe and the Americas. I still cannot decide if this is a characteristic of COVID-19 or simply a result of more thorough testing and more transparent reporting in liberal democracies.

The death statistic is also similar: 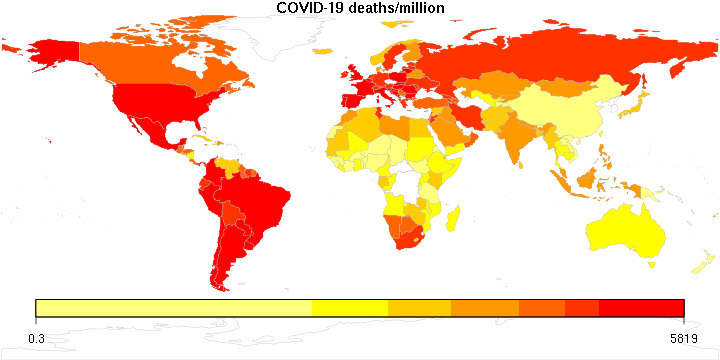 The reddest areas are again the Americas and Europe, including Russia, but also Iran. The encouraging news is that the death rate per million didn’t rise quite as fast as the number of cases per million population. This may indicate that we have become more successful treating people (of course a more sinister possibility is that the most vulnerable, such as the elderly in homes, died first, pushing up last year’s death statistic.)

To see this more clearly, here is the mortality rate, that is, the percentage of deaths per cases: 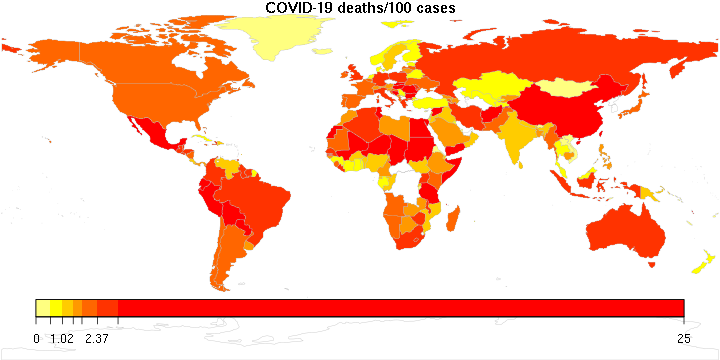 Last year, North America and Europe, along with China, led the pack. This year, it’s quite different: both North America and Western Europe have fallen behind, which is to say, fewer people who catch COVID-19 actually die.

Another difference of course is that we can now protect ourselves and others around us by getting vaccinated. So please, do not hesitate, do not buy into insane conspiracy theories. Vaccines carry a tiny risk, but so does stepping outside to do your shopping, because you never know when a wayward car might jump the curb and kill you. But vaccines also protect you from a debilitating illness that often cripples even its survivors with lasting health effects. And no, vaccines are not an evil plot by Gates or Soros to get you microchipped; the technology just doesn’t work that way. Similarly, no, 5G cellular technology, which is mostly about using radio waves more efficiently, often with less power than current networks, has nothing to do with biology. Last but not least, whether the virus came from bats or a lab (there is little doubt in the literature that it is of natural origin, but that does not exclude the possibility that it was released from a lab by accident — such accidents are known to have happened even in high biosafety labs around the world) makes no difference: in the end, it can kill or maim you just the same, and the best way to protect yourself and your loved ones is through vaccination and responsible behavior (masks, distancing). In short (and with apologies for preaching): it’s not politics, people. It’s epidemiology.